Director of Studio Ghibli's latest work "Windless", Miyazaki Hayao is the appearance since Ponyo on the cliff in NHK "Professional work style" broadcasted next week on 8 Mon 26 (Mon).

A documentary movie "The Kingdom of Dreams and Madness" closely linked to Studio Ghibli will also be released in the fall! 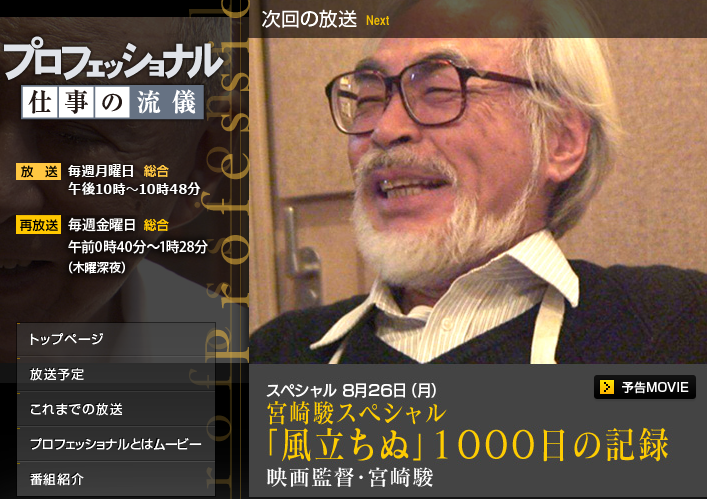 Miyazaki's latest film, "The Wind," was released last month and the number of spectators mobilized has exceeded 580 million. To be broadcast on XNUM X day"Professional Work Style Miyazaki Hayao Special" No Wind "XNUM X Day Record"Then, as with the previous work "Ponyo on the cliff", I will do long-term close coverage over the 3 year. While overcoming the Great East Japan Earthquake, I think that you can see how this film “Kazenaku” was made from the storyboard production process to the film completion.

I am really looking forward to the special edition of 73 ^ ^

"No Wind" Making Documentary "The Kingdom of Dreams and Madness"

Director Miyazaki Hayao, director Takahata Isao, and Suzuki Toshio. How is it expressed from the viewpoint of Sunada how the XNUM X Giant Tower that reigns in Studio Ghibli has made the film and pulled the people who work in Studio Ghibli? This is also very fun ^ ^

The other day, Friday Road SHOW! In the last part of the main part is flowing, you can see the scene of the casting of the main character of "no wind" Jiro Horikoshi. Produced by Director Miyazaki, who the assistant producers cast wasn't very good at itThe figure that the protagonist decides to Hideaki Ogino in a sudden turn is right the kingdom ^ ^

Ghibli is also the one that makes this casting come true. However, the voice of coach Hino was good. This documentary is likely to see other unseen production secrets. "Story of Kaguya Princess" decided to be released on XNUM X Moon X NUM X is both fun (^ ^)

[Kawagoe Sanpo] I wandered in a small Edo atmosphere Kuramachi

'Movie'Popular articles in the same category