The Ghibli's booklet "The Hot Air" featured last month's "Special Feature Evangelion Movie: The Q" is not popular for the first time in much popularity. Currently, PDFs are being distributed free of charge from Studio Ghibli's site for a limited time (up to 1, month 31, day 18: 00). 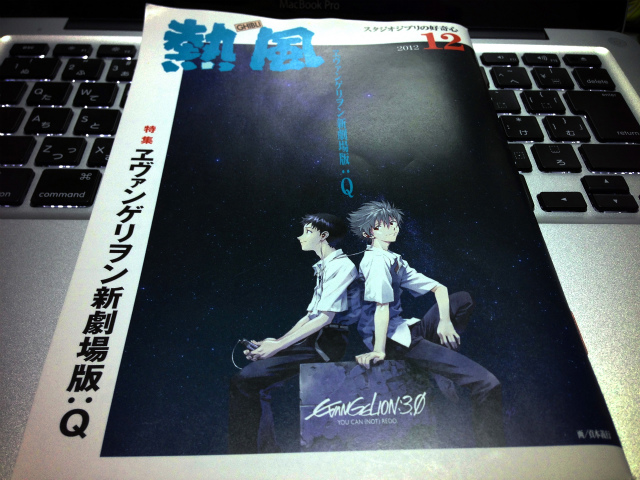 Hot Air is a booklet published by Ghibli Publishing Department. It is not for sale and can only be obtained from some bookstores or the Mitakanomori Ghibli Museum.

I have also been searching for several times, but in the end I could not get one.

Hideaki Ogino has been in charge of the original picture of the Last Giant Goddess at Nausicaa of the Valley of the Winds, so it has a deep relationship with Studio Ghibli. Recently, I was also involved in the production of "I will appear in the Giant Goddess Tokyo", which was screened at the "Captain of Hideaki Ogino Tokusatsu Tokusatsu Museum in Miniatures", which was held last summer.

It is possible to get a glimpse of the director and director of Ogino by the contribution of Ms. Togashi, general director assistant.

Many serialized by luxury celebrities

Although not delivered, there are a number of serializations by celebrities who are luxurious in "hot air".

Mr. Kawakami's "The future of the net understood by Mr. Suzuki," who is currently a producer apprentice to Ghibli, and the movie talk "Harrior's Rest" by former director Chunichi Dragons and Hiromitsu Ochiai is very interesting!

It is very interesting as a reading material, but as I mentioned earlier, it is very difficult to obtain. So I recently decided to subscribe. The subscription fee for one year (issued 12 times a year) is 2,000 yen (tax included). The only drawback is that you can not sign up online and you have to do a postal transfer. Well that's Ghibli, though.

If you can see it at a bookstore, we recommend that you get an immediate GET.