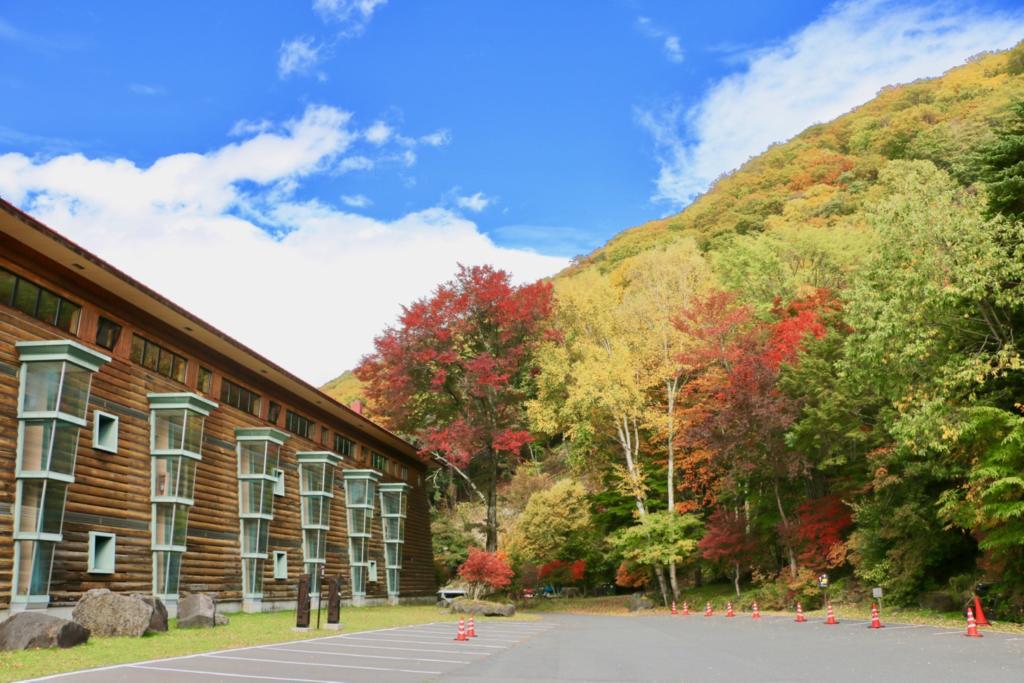 The autumn leaves season is coming soon! This time a major tour busHato bus"of"Nikko / Chuzenji lake tour courseWe have been enjoying the fall sunshine and autumn leaves (^^) divided into XNUM times in the first part and the second part, and we will report the car report! 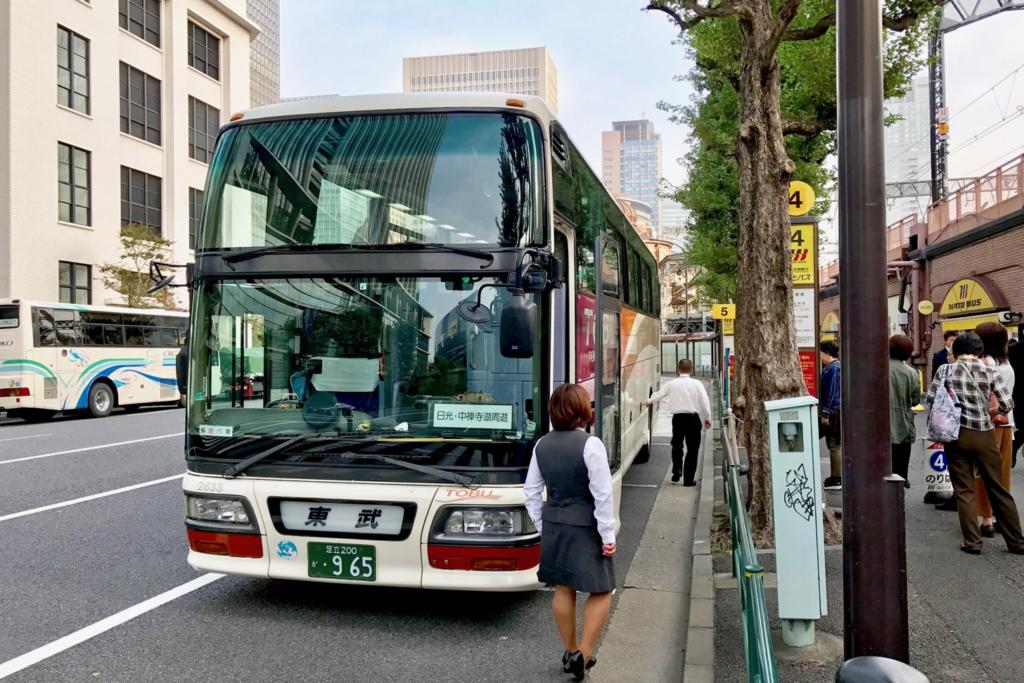 I participated this timeNikko / Chuzenji lake tour course"Is a joint operation of Hato Bus and Tobu Bus. This time I went to Nikko by Tobu bus. This day is a weekday from the beginning of 10 Mon, XNUM at 7 in the morning and departs from the Hatoh Bus Terminal on the south side of the JR Tokyo Station Marunouchi.

When I got on the train, I showed the ticket and got the ticket and "Hato bus patch". Since the bus seat is already fixed, I will sit in the designated seat. Wappen is to indicate "Hato bus tour guests" at Nikko Toshogu entrance visit. Let's put it in the position that can be shown immediately, such as chest and backpack!

This time, the Tobu bus I took was a so-called 4 row seat sightseeing bus.

There is no toilet, so take a rest break in the parking area when moving.

You can see the distance between the seats. There was a green tea service from the guide on the way back and forth. 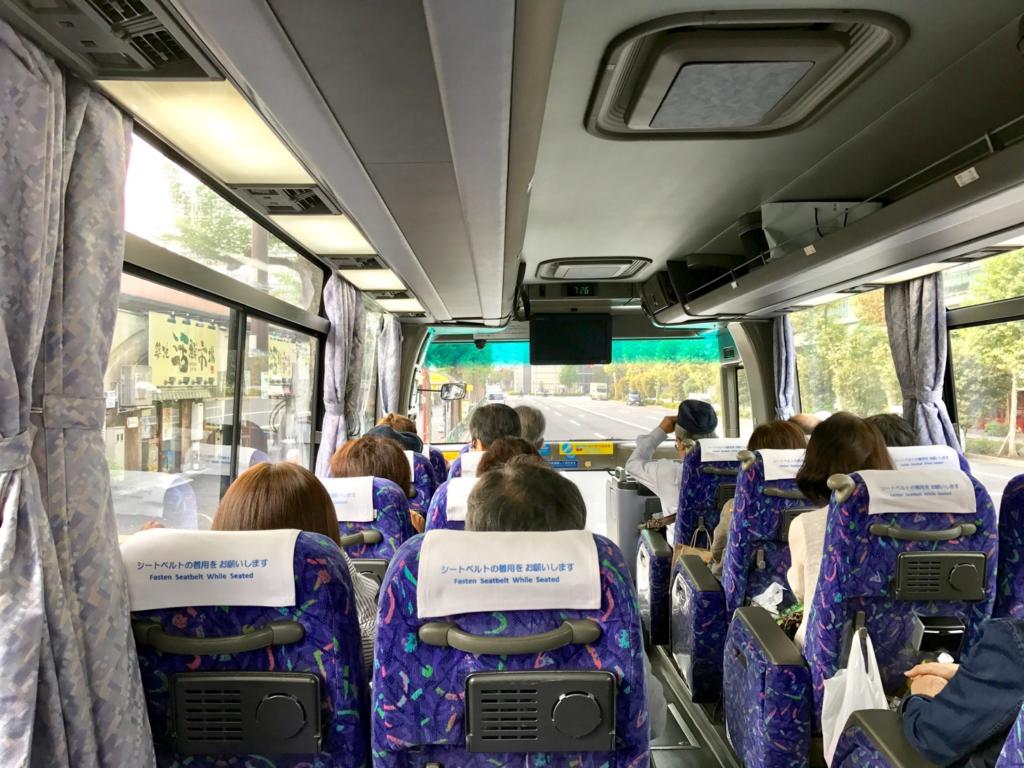 The tour participants on this day were almost full with 40 people. Aim for Nikko on the Tohoku Expressway with a humorous guide's attendant.

Well, let's take a look at the schedule of the "Nikko and Chuzenji lake tour course" here.

It is a day trip bus tour where you can go around sightseeing spots representing Iroha Saka, Kegon Falls, Nikko Toshogu and Nikko.(The charge includes lunch at Chuzenji Kanaya Hotel and the admission fee for Rinnoji, Toshogu Shrine and Futarasan Shrine)

As it is a bus tour, depending on the road conditions, such as traffic congestion, time may be significantly delayed. Especially during the fall season, traffic on hills increases during this season, and it is likely that the return schedule will be delayed.

By the way, on this day, the guide was also surprisingly surprised that there was no traffic jam on the northeast road, and at the beginning, I planned to head for the waterfall of Kegun after having lunch at Chuzenji Kanaya Hotel, but it will arrive too early Because of this, I changed the order and visited Kagoshima Falls before having lunch at the Chuzenji Lake Kanaya Hotel.

It took less than XNUM hours from departure to restroom (XNUM minutes) at Otani PA in Utsunomiya, Tochigi.

You will receive "Lemon Milk", a specialty of Tochigi, at the store (^ ^) 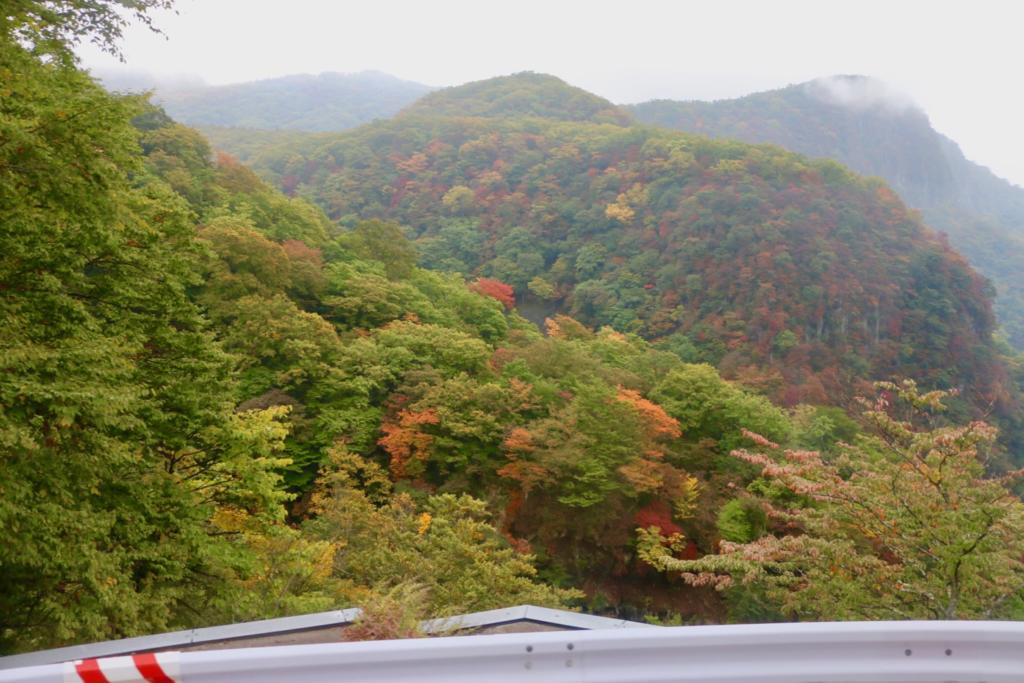 After a break, climb up the slope and proceed to Oku Nikko.

It is quite hard with the continuation of the hairpin curve, but I could see the colored leaves well from the window (^ ^) 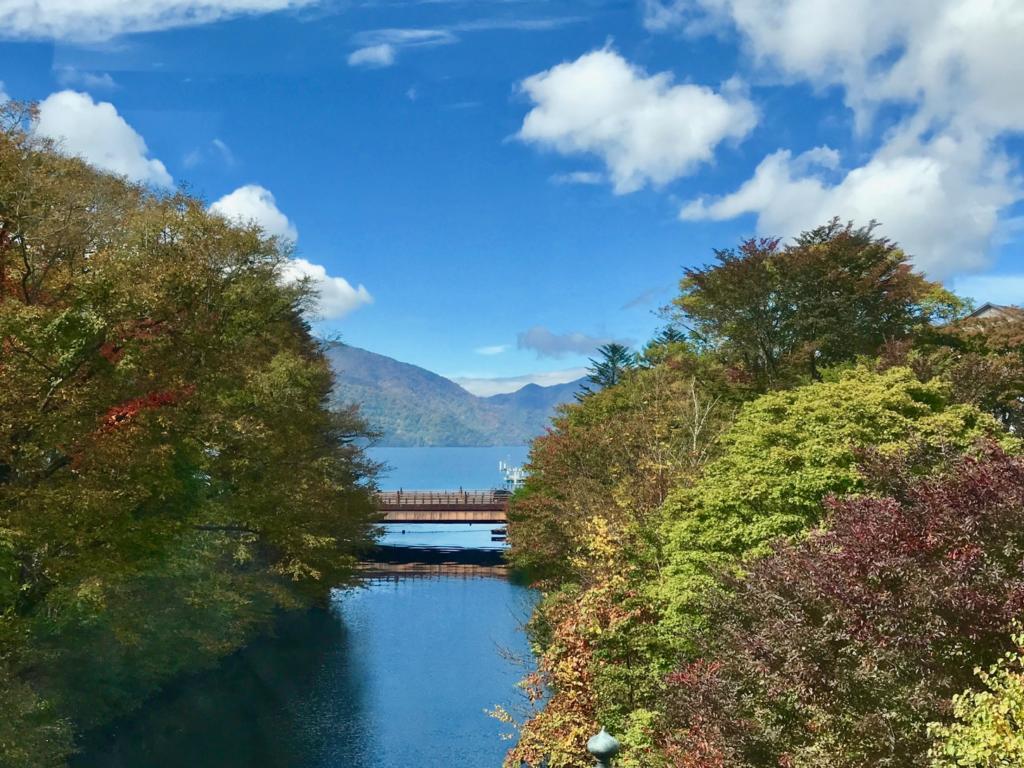 I arrived near Lake Chuzenji in Oku Nikko. It was cloudy in the morning and the weather was not so good on this day, but the moment I got to Lake Chuzenji, the weather suddenly recovered so that I could see the blue sky!

Soon, we will arrive at Kegon Falls.

I came to Kagoshima Falls for the first time in 29 years since I came to school when I was in sixth grade.

The tour time for Kegon Falls is usually 30 minutes, but it arrived for quite early, so it was around 1 time for tour.

Kegon Falls can be viewed at the free observation deck where the waterfall is viewed from the top and at the 100 site of the paid boarding platform where you can get to the basement XNUMm by an elevator. The elevator charges were round trip adults (more than junior high school students) 2, elementary school students (preschool children free) 550 yen. This fee is not included in the Hato Bus Tour fee, so you pay only for yourself.

If you buy tickets and go to the elevator, you already have a lot of school students on school trips (^^;). There are 2 elevators, but the capacity is 30 people, so I waited about 15 minutes to 20 minutes until I got down to put the group customers on top. I will wait more on the weekends of the tourist season. 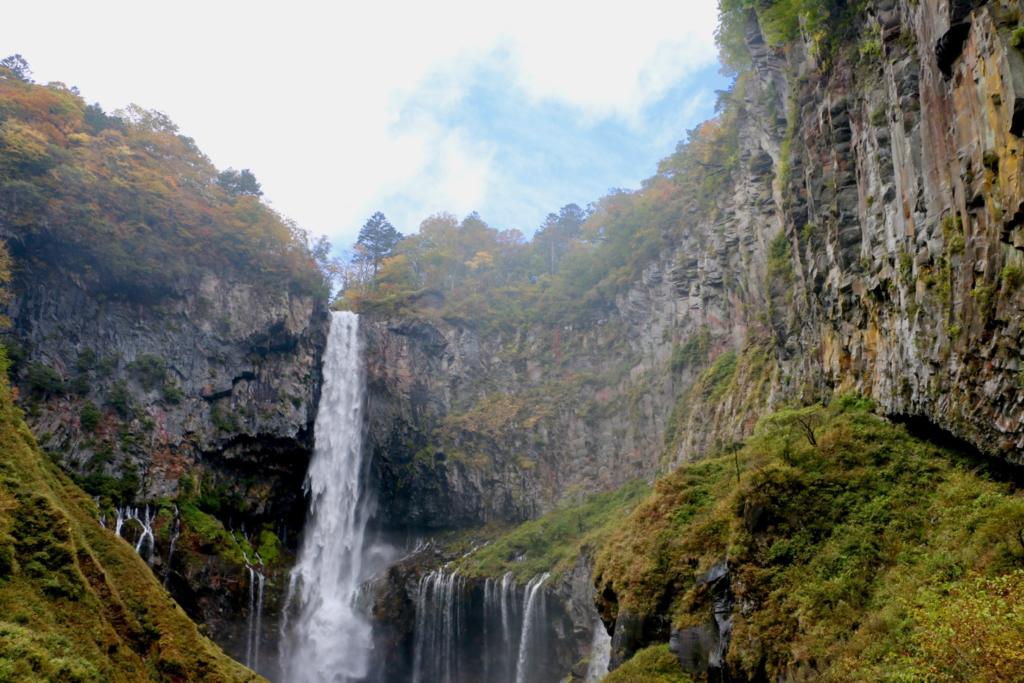 Get off the elevator of height XNUMxm, go through the underpass, with the sound of a great waterfall, a hugely powerful "Kagen waterfall" appeared in front of your eyes! it's amazing! 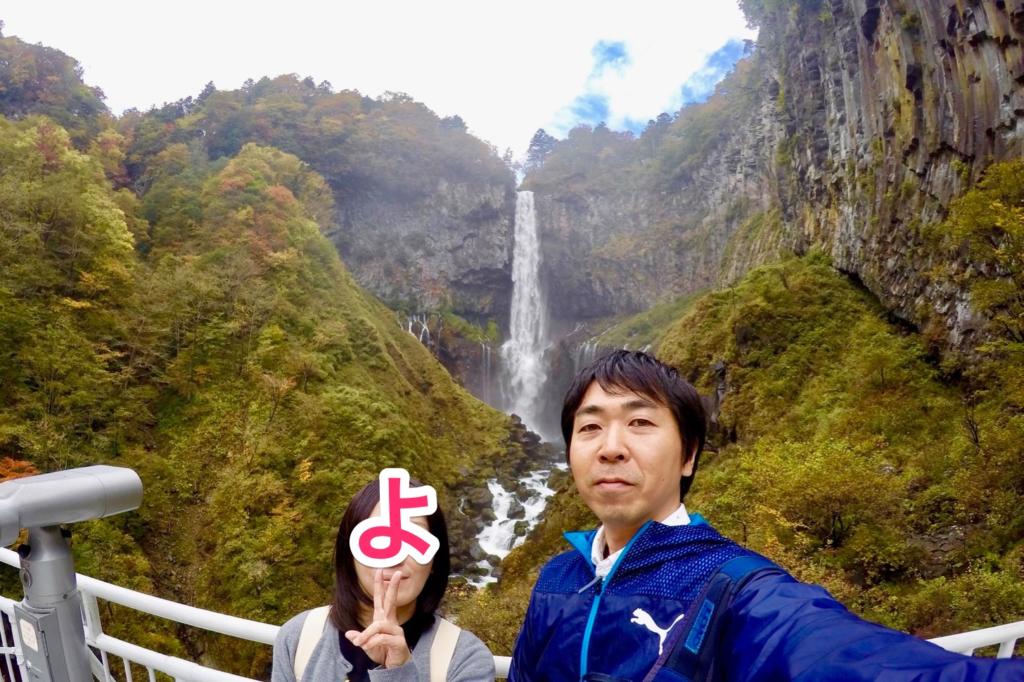 "Kagen Falls" where a huge amount of water flows from the Chuzenji Lake, which was seen from the inside of the bus just before. There is a fall of 3 meters, and there is Nachi Falls in Nara Prefecture.Waterfall of Fukuroda in Ibaraki PrefectureAlongside, it is counted as one of Japan's three best names. 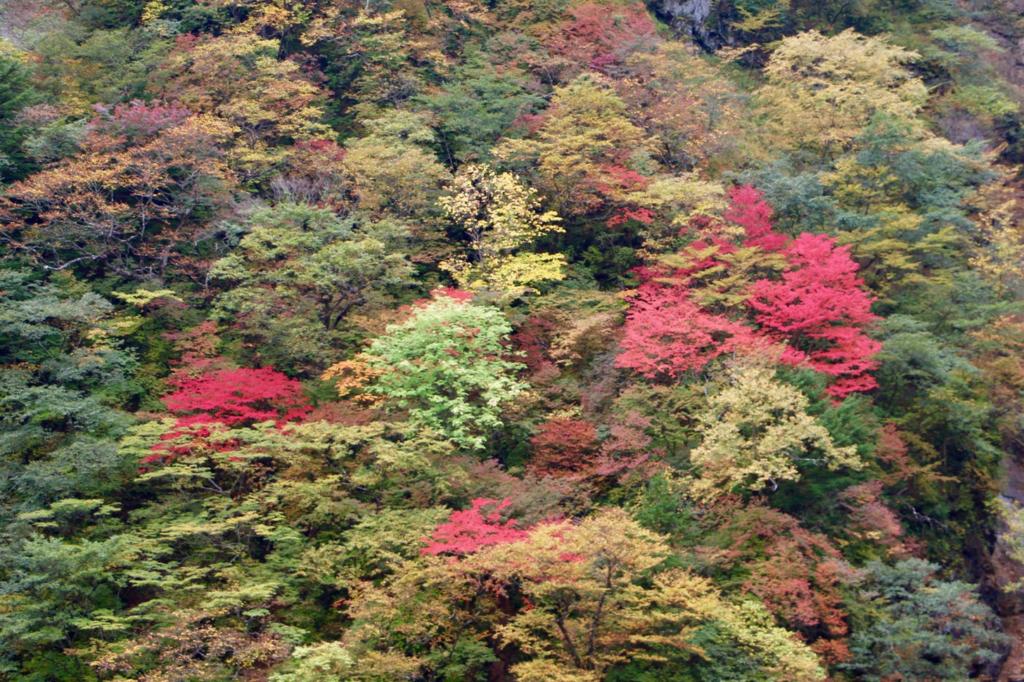 At this time, the autumn leaves were just beginning, and I could see the colored mountains, but the tour time was decided, so I could not see it slowly, and the viewing platform was a stay of about 5 minutes. The

Wait for about 15 minutes for the elevator on the way back to the last minute of the bus. In this area, it is difficult to make a tour with a fixed time. 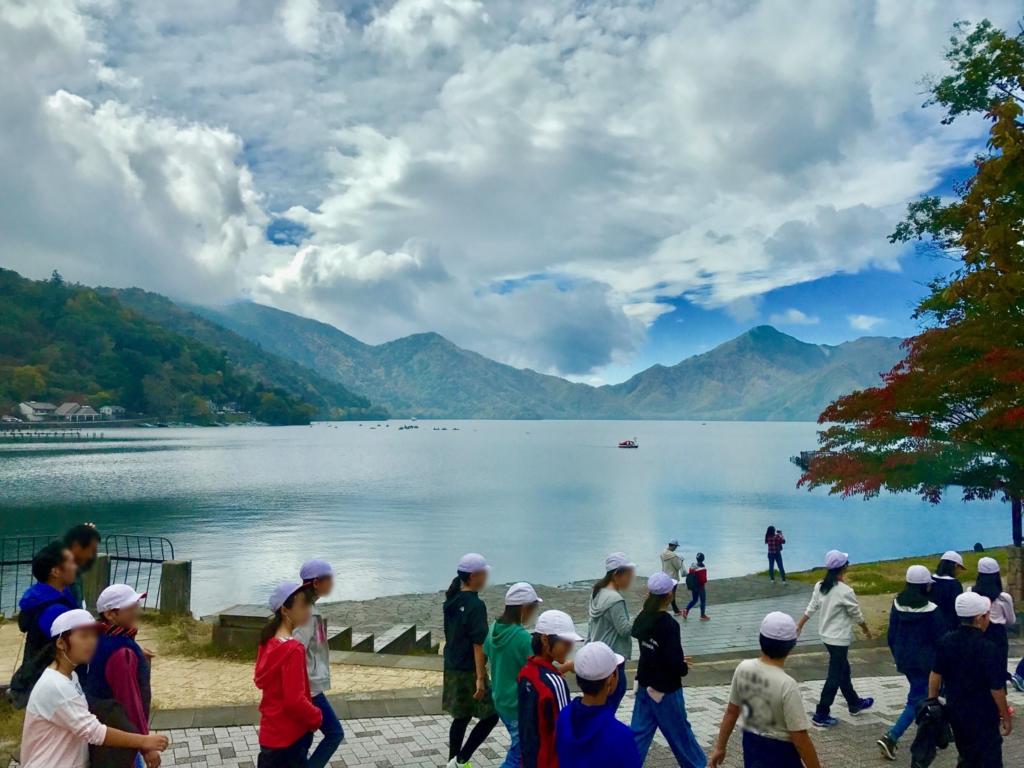 It takes a few minutes by bus to the next destination "Jonjujiko Kanaya Hotel" from Kegon Falls. It is moving while looking at a nice view of Chuzenji Lakeside.

Located on the shores of Lake ChuzenjiChuzenji Kanaya Hotel"It is lunch.

This is a long-established resort hotel designed by the Canadian architect J. Sturges as the XNUM Hotel of the Nikko Kanaya Hotel, the oldest classic resort hotel in Japan, built in 2 (Showa 1940). is. 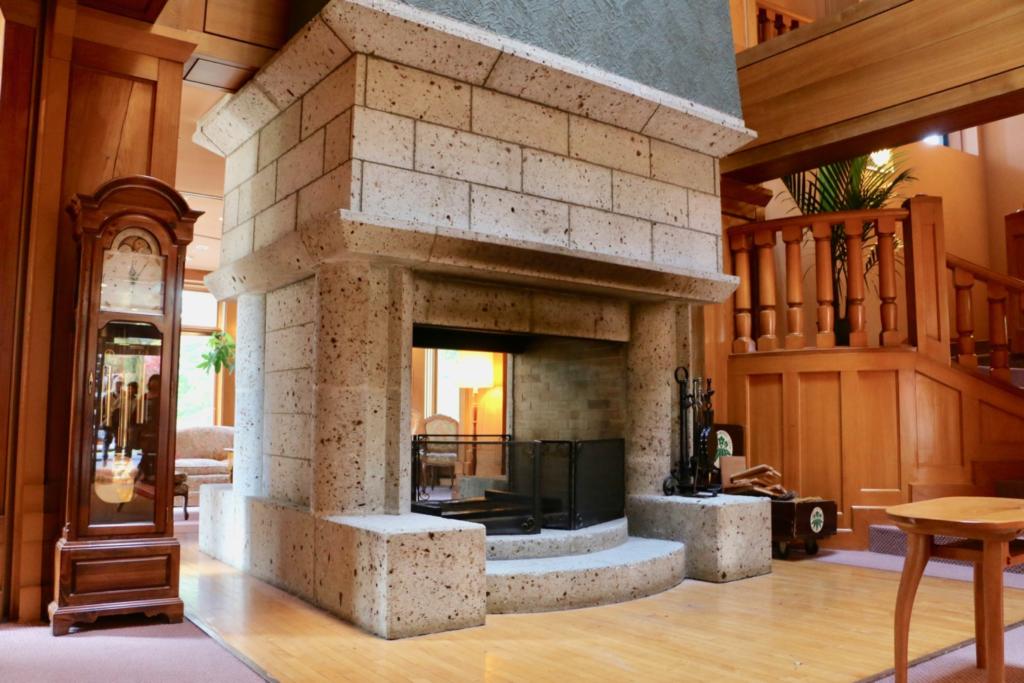 When you enter the lobby, it looks like a breath of breath. There is an old wall clock on the side of the fireplace. 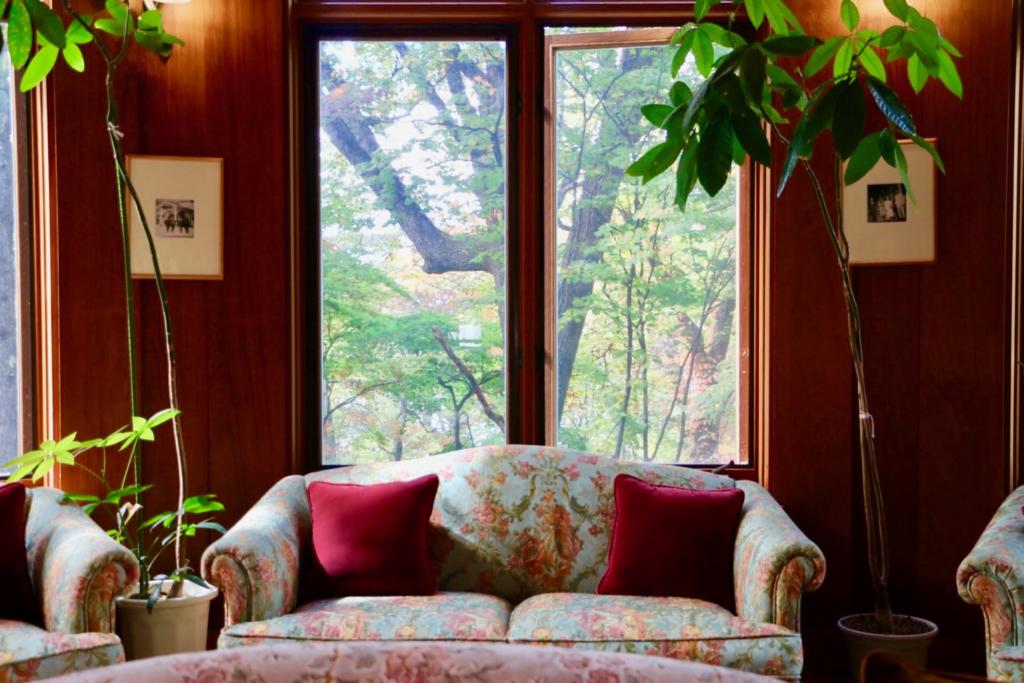 A number of retro sofas and tables that seem to be created in one scene of the Ghibli movie "Windless" creates a high-quality space. It is a Western-style classic hotel!

Lunch in the dining room "Mizuna" 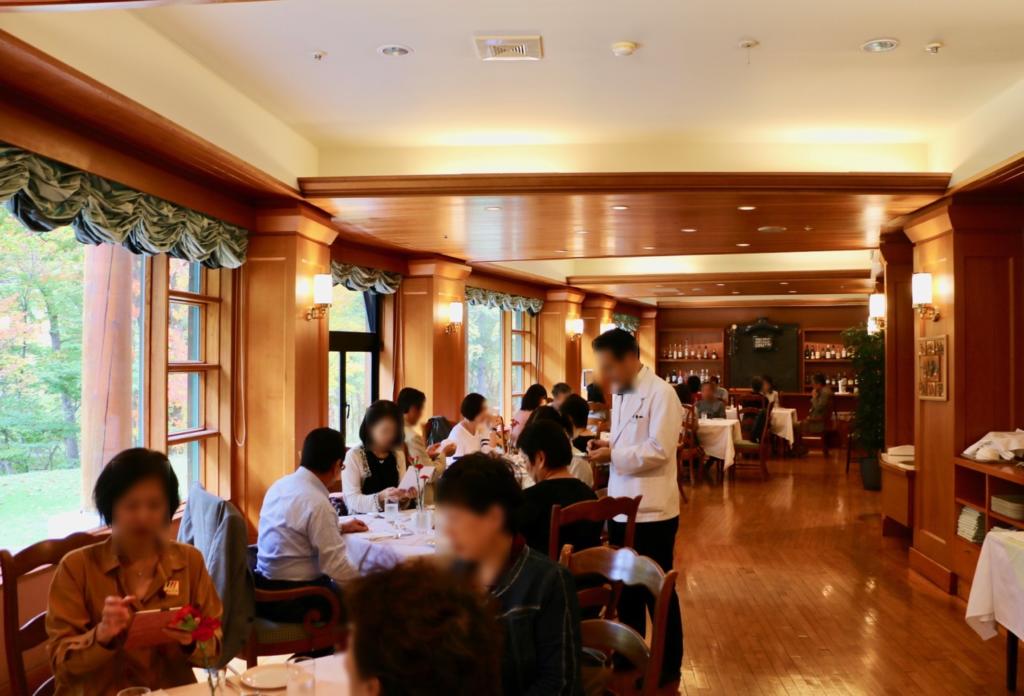 At lunchtime, you will have a lunch course in the dining room "Mizuna" located in the hotel! 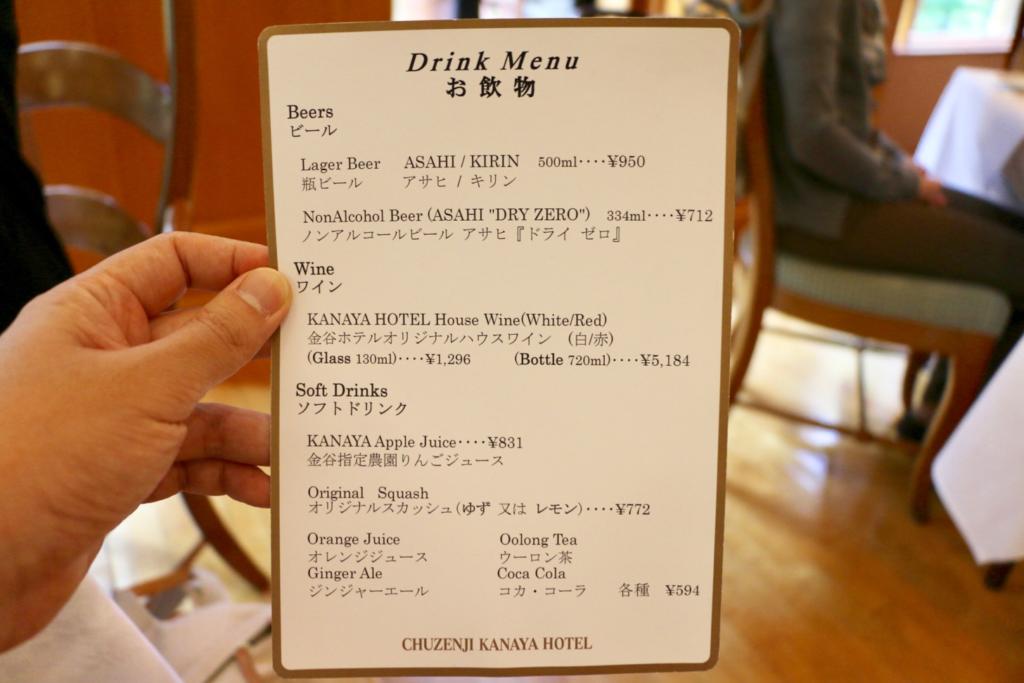 Lunch is included in the bus tour, but only drinks need to be settled separately.

Both beer and wine hotel prices! 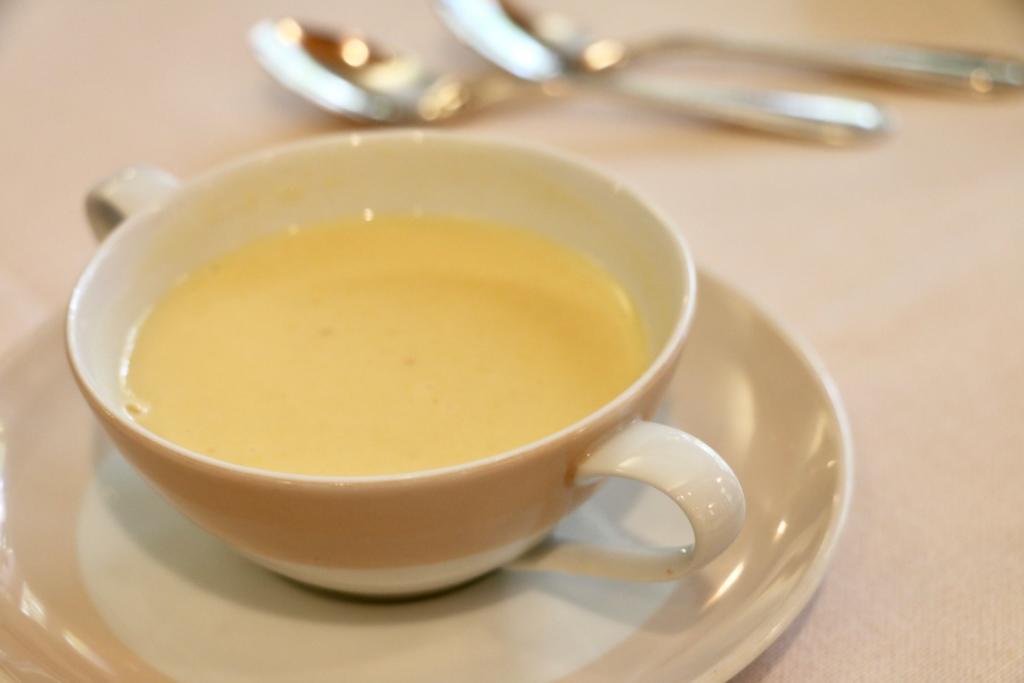 The first is potage-style "vegetable soup". It is delicious with a gentle salty taste. 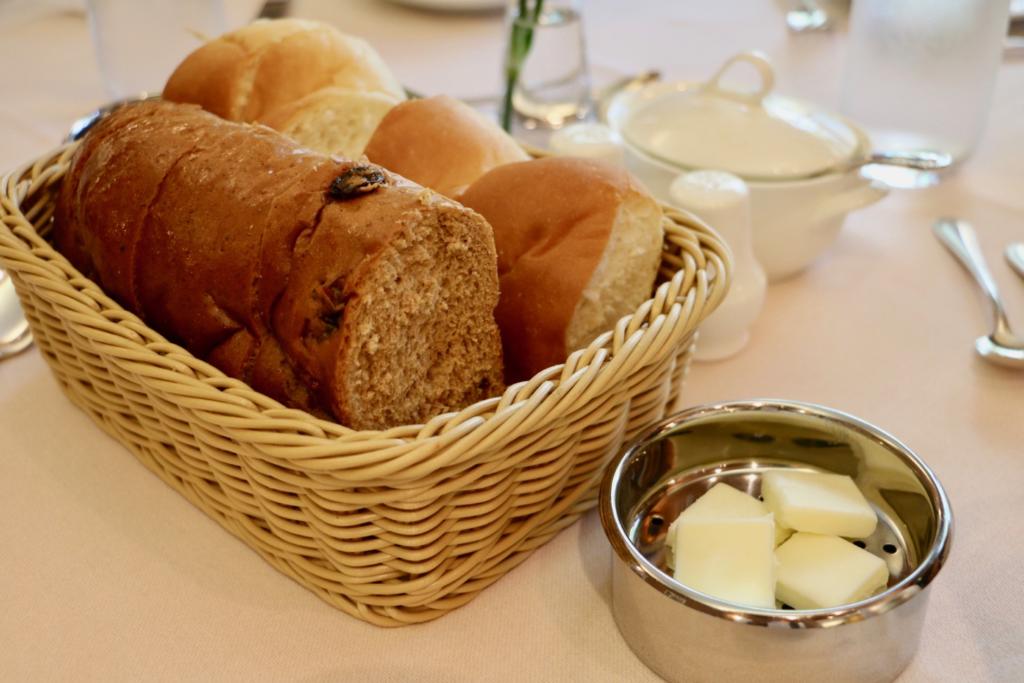 Bread is XNUM type of grape bread and plain bread. Both tasteful (^ ^) 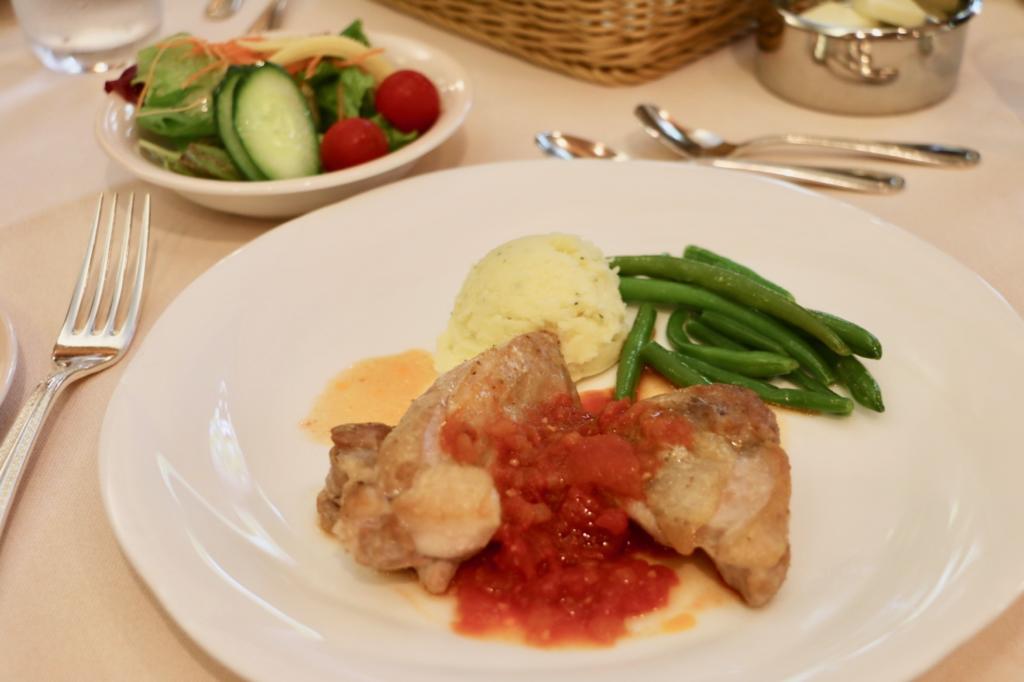 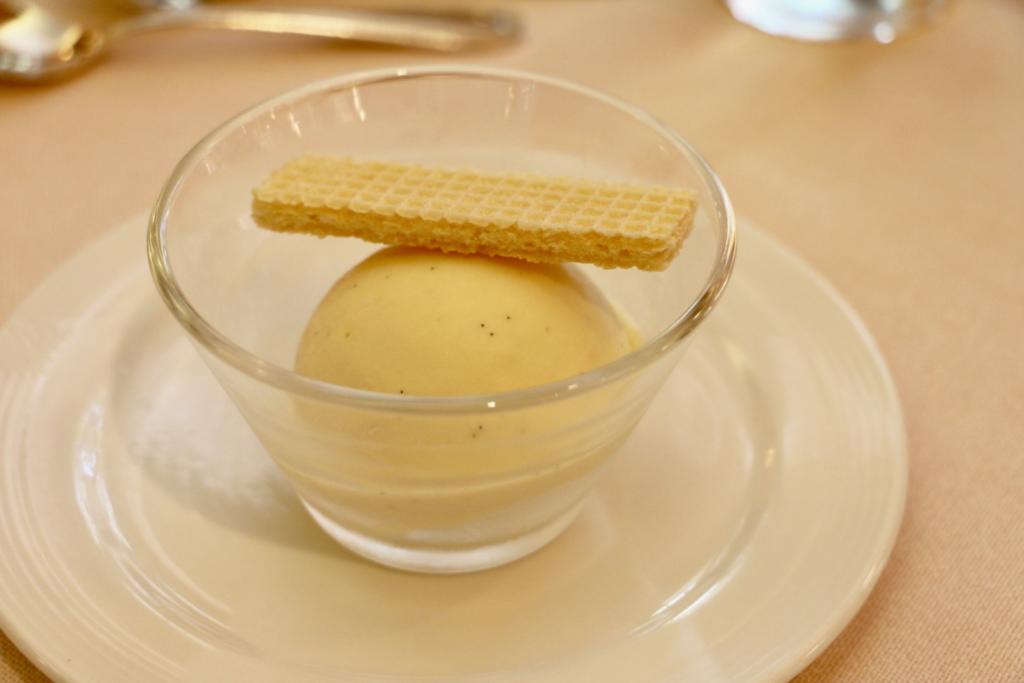 The dessert is vanilla ice cream (^ ^) where the wafers got on 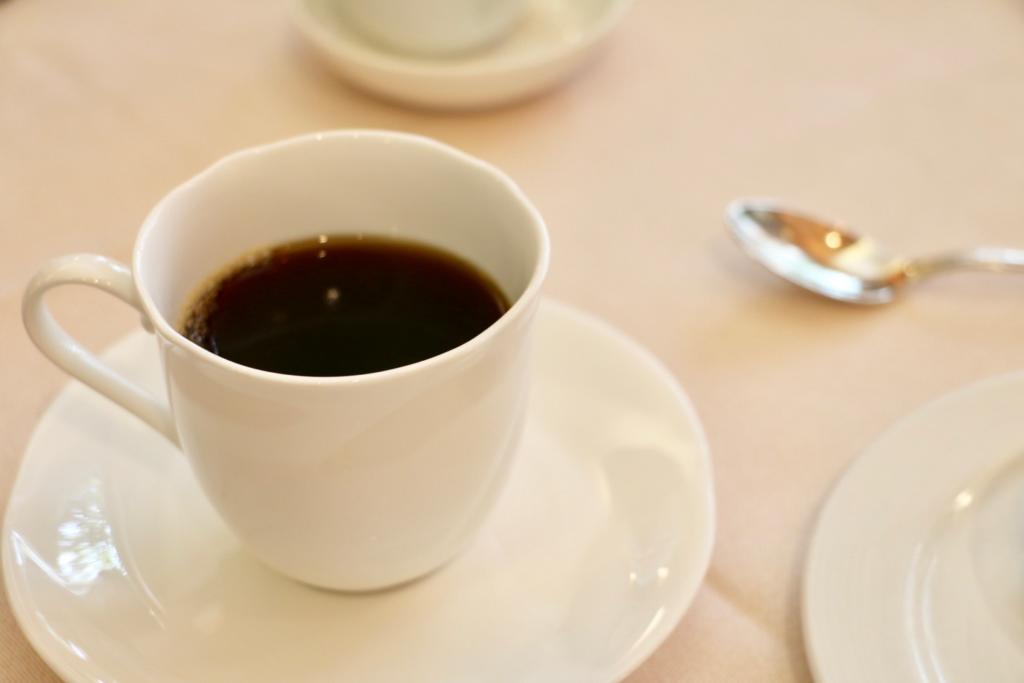 You will have coffee or tea after your meal!

From the window I could see Lake Chuzenji, which has begun to be colored.

The souvenir is "Hundred-year rice curry" which is a specialty of Nikko Kanaya Hotel. Beef curry and chicken curry were both popular. 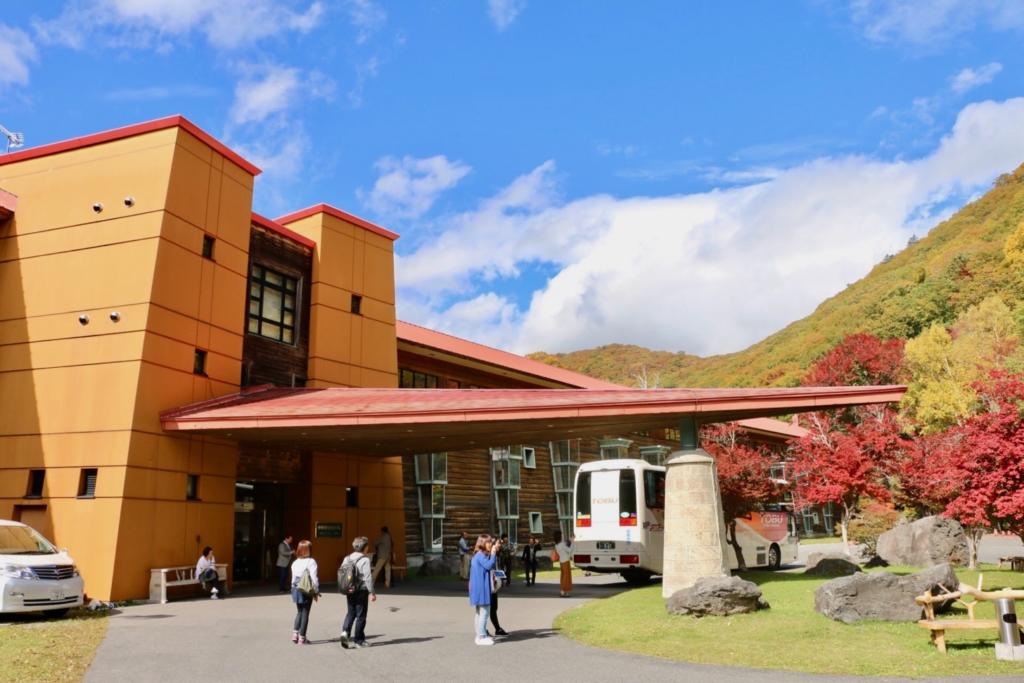 After lunch, walk around the hotel until bus time. 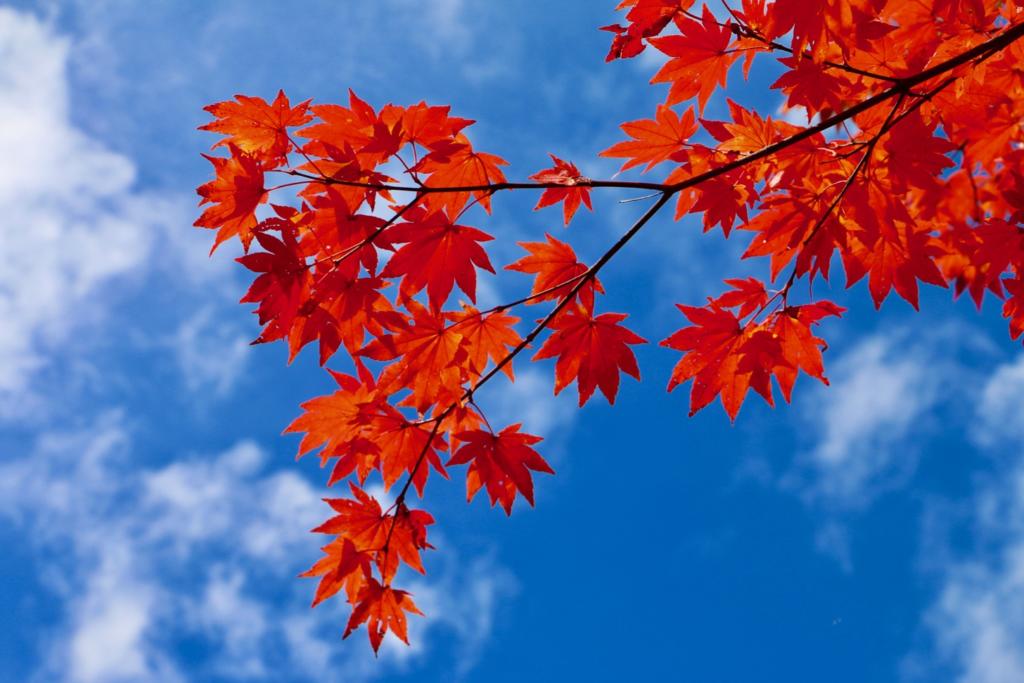 Everybody who participated in the bus tour also had a commemorative photo taken! 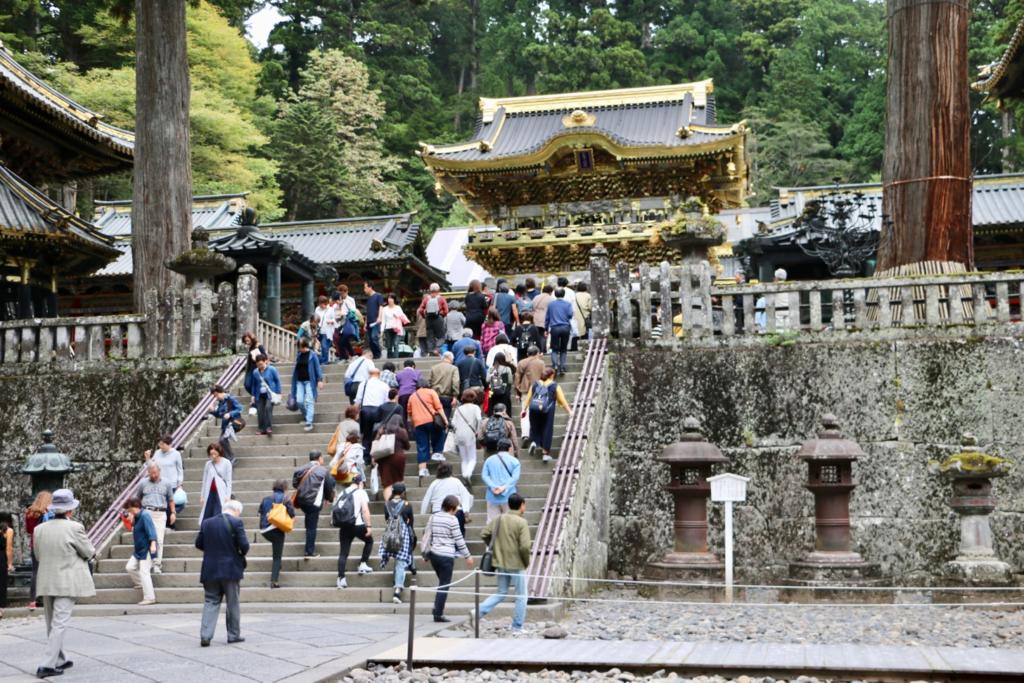 By the way, in the afternoon, we will return to Nikko city and visit Nikko Yamauchi such as Rinno-ji, Nikko Toshogu, Futarasan Shrine!

Continue to the second part.